When you pick up a Cat Porter book, other than being guaranteed an awesome story with amazing writing that draws you in, you are assured to have a gripping second chance romance. But these second chances are not just between the characters but a second chance for the characters to find their salvation, redemption and acceptance of their journey. All this is wrapped in the raw grittiness of an MC club that has its own challenges, suspense and a strong brotherhood. Cat Porter is bound to leave you breathless, with your emotions strung like a tightwire at times and a deep satisfaction with a story and characters that won’t leave you for days.

Butler & Tania have both found themselves at a cross roads of their lives. Having both experienced disappointment, they find themselves on a pilgrimage to the one place that they have always felt like they belonged – home. Now is the time for both of them to rediscover themselves and work towards their happiness. But what neither were expecting was each other, nor a second chance at the happiness that they see all around them.

But a chance encounter, and continued crossing of paths through their friends and the MC Club – One Eyed Jacks – Tania & Butler are finding it harder and harder to deny the attraction that sizzles anytime they are near each other. Can they be the support each other need during this period of transition and redemption? Can they find everything that they thought was out of reach, in each other? Can they finally get what everyone else around them has achieved – a second chance at love and happiness?

I continue to be in awe of Cat Porter as an author. She is one of the most underrated authors in my opinion. Her books have EVERYTHING to satisfy me. And her writing has a way of transporting me inside her books that I am literally caught up with her characters through their struggles, triumphs, utter failures and ultimately them finding love.

Going into this book, I really did not believe that I would love any characters more than Dig, Grace & Lock. Well, Cat Porter well and truly proved me wrong. I think that Butler has well and truly cemented himself as my favorite. I will admit that as a fan of this series, I had mixed feelings about this character and if I really wanted to read about him. But it was when we got into the nitty, gritty of his soul that I was delighted with how he just really wanted to redeem himself in the eyes of those that mattered most. It was his absolute dedication to doing the right thing, and his big ol’ heart that has cemented his place.

I did not know what to expect of Tania going into this book. Sure I knew her on the surface but I didn’t really know where her character was coming from, despite featuring in the previous books.

So I was delighted when I got to read a woman that despite her strong facade and relentless was trying to wade through the disappointment of her life to get her new beginning – her everything.

There were moments where she could have succumbed to the drama that surrounded her, but she always went with her head high while holding onto the belief that there was more for her. I loved her growth and journey.

The chemistry between this pair was undeniable throughout this book, despite the challenges and obstacles that they faced. The moments when they were true to themselves because the pull was too much were explosive and raw. They are HOT together and the passion that ignited was fast and furious but also honest and more real than either had ever experienced.

But what I love the most throughout the series, and the part that actually moved me the most, was the way that we saw yet another way that Dig transformed the life of those around him and set them on their true path. There is just something about the way that this man wove everyone together and brought around so many second chances that his effect is profound, even after he is long dead.

Blood and Rust is a must read for those readers who like to be part of the journey, not simply a spectator. These words will not leave you any time soon and will have you eagerly awaiting more from the fantastic author. You will truly be blown away by this story.

Blurb: The bad boy.
The fuck up.
The thief.

Once a king,
Now a wanderer.
I’d thrown the best parts of me away, over and over again.
I was reckless.
Still am.
I’d been exiled.
Twice.
I did my time.
I’ve cleaned up.
Well, sort of.
I got plans.
Yeah, good ones.

Then I ran into her.

A bolt of lightning
Startling
Unsettling
Breathtaking
Out of reach.

She’s the epicenter of the war I’ve triggered,
of the battle in my rusted heart.
I may be as reckless as I ever was,
but I’m determined as fuck.

To hell with it.
I want it all. 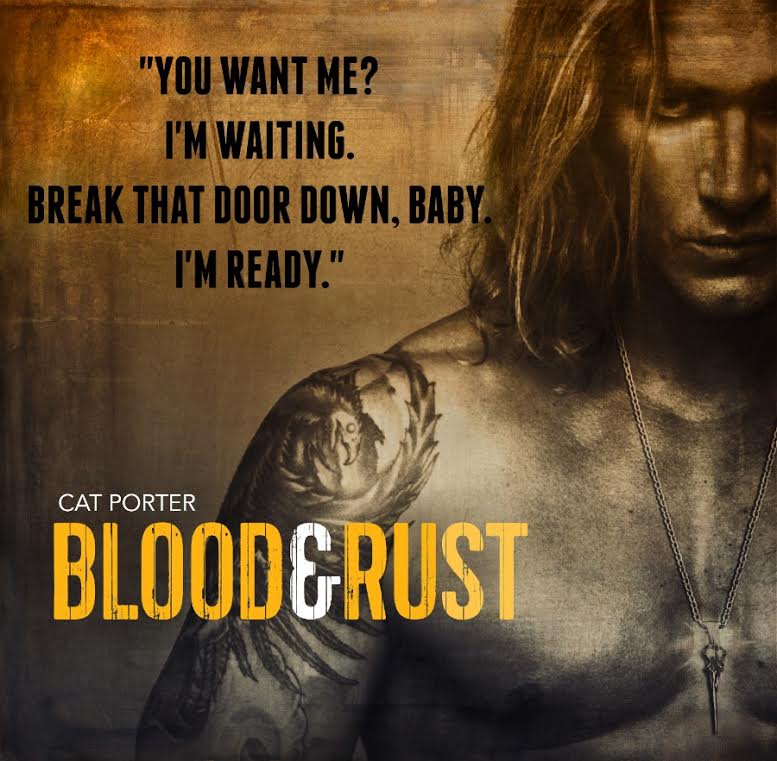 Other Books In Series

CAT PORTER was born and raised in New York City, but also spent a few years in Europe, Texas and the suburbs along the way. As an introverted, only child, she had very big, but very secret dreams for herself. She graduated from Vassar College, was a struggling actress, an art gallery girl, special events planner, freelance writer, and had all sorts of other crazy jobs all hours of the day and night to help make those dreams come true. She has two children’s books traditionally published under her maiden name. She now lives in Greece with her husband and three children, and freaks out regularly and still daydreams way too much. She is addicted to old movies, the History Channel, her iPad, her husband’s homemade red wine, really dark chocolate, and her Nespresso coffee machine. Writing keeps her somewhat sane, extremely happy, and a productive member of society.